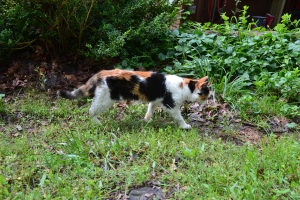 As we age, our worlds take on a different dimension. Cats as well as people. So  it has been for Second Hand Rose. Named after the song, she passed from hand-to-hand before I was approached to adopt her. A calico, my first thought had been getting her spayed quickly, followed by I do not need another animal in a three cat, three dog, two-horse household.  As fate ruled, she and I lived together twenty-one years.

From the beginning, Rosie ‘talked’ to me. Whenever she needed something, usually from the kitchen, she sat next to my chair before tossing patience aside and meowing until I got up and followed – yes, followed her—to see what she wanted/needed. Ears cocked listening for my footfalls behind and tail held high, she ‘told’ me what she wanted and where in the household it was expected. Generally, two choices reigned supreme—‘I need to go outside’ and ‘I want more food.’

She roamed the yard, the pasture, the barn, the woods. The queen of all she surveyed, she ruled with a velvet paw.She could watch nesting birds come and go feeding their brood, scale the tree, and dig in the nest for their tender hatchlings. Such times, I captured and relegated her to the house until said feathered family grew and took flight. Rabbits and mice also fell within her domain thus consigning her annually to several spring weeks inside while wild creatures grew to independence. Except at night when only the moles were in danger.

Years slipped by and her world narrowed and her ‘talking’ took on an intense hue. She rested in my lap at night watching TV. She sat on the bench next to me at the table and scoffed tidbits. She purred. Bedtime? Rosie waited until I rose from my chair and began the nightly routine then assumed her ‘place’ on the bed.

She spent time hanging in the country flowerbeds, sleeping on deck chairs, and sitting in the sunshine on my patio. Her furry family circle ebbed and flowed, old friends passed and new arrived. Arthritis set in. Joints enlarged. She prowled less in her woods. She missed the sandbox as often as she was on target. Nights consistently spent in.  She no longer climbed trees and nor jumped from chair to deck railing to roof. She napped when outside. Ate less. Napped inside. Her days unevenly divided into eating and sleeping with scattered minutes of time reserved for pacing and ‘attending’ to the household.

August 10, 2015, Rosie’s world is re-formed. She roams her beloved woods, sits in the sunshine grooming, and meanders out on feline adventures. Again.